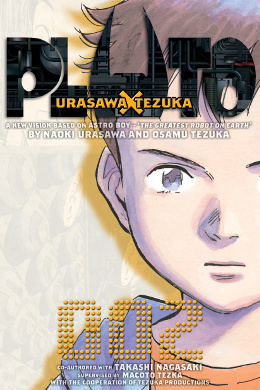 Based on a classic manga series by Osamu Tezuka, Astro Boy (Atom), Pluto is a magnificent bestselling and award-winning manga graphic novel series by Naoki Urasawa. Originally the series was released as serials in Shogakukan's Big Comic Original magazine. In this series, Naoki Urasawa specifically remakes The Greatest Robot on Earth story arc from the Atom (Astro Boy) and the title Pluto is taken from the name of the main villain in that story.

In a suspenseful and thrilling atmosphere, Pluto follows the investigation of agent Gesicht, a Europol robot detective. There’s a big question and terror when most powerful robots in the world and their creators are being targeted by a mighty and mysterious murderer. There are 7 most powerful robots and in one way or another are related to the 39th Cental Asian War, a war that destroyed the Persia in the past.