Will Eisner - A Contract with God Read Online 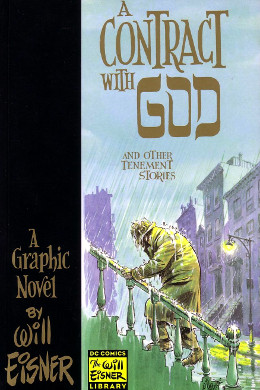 First published in 1978, A Contract with God and Other Tenement Stories is a graphic novel written and illustrated by American cartoonist Will Eisner. With his works such as The Spirit series, Eisner has been considered one of the most important comic authors and artists in history. It became even more so with the publication of A Contract with God, which was an influential piece work for popularizing the term and production of graphic novel in comic business.

There are 4 chapters in the book that each tells a stand-alone short story. These stories focus on poor, unfortunate characters who live the hard lives in a tenement in the Bronx of lower Manhattan. Eisner brilliantly pictured touching and tragic stories that emerged in such social condition in a place that’s probably widely referred to as a “slump.”


(A Contract with God graphic novel Chapter 2: The Street Singer, Read Online)
Chapter 2, The Street Singer, follows the story of Eddie, a young street singer around the tenements. He meets Marta Maria, mature ex opera singer, who seduces him and gives him some money. Eddie uses the money to buy whiskey and returns to his pregnant wife. Eddie plans to gets more money from and takes advantage of Marta but could not remember which tenements she lives in. 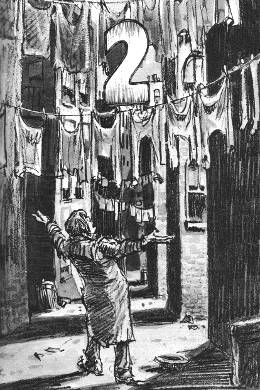 (Read Online Chapter 3: The Super from A Contract with God and Other Tenement Stories graphic novel)
The 3rd chapter in Will Eisner’s graphic novel A Contract with God is The Super. It tells the story of Mr. Scuggs. He is a rough anti-Semitic man and the superintendent of the tenement at 55 Dropsie Avenue. All the tenants fear and dislike him. His only friend is his dog Hugo. One day, Rosie, a young girl who lives in the tenement, approaches Mr. Scuggs and offers him a peek at her panties for a nickel. As it turns out, Rosie is tricking Mr. Scuggs and it leads the man to a tragic fate.


(Read Online A Contract with God, Chapter 4: Cookalein, by Will Eisner)
The 4th and last chapter is Cookalein. It follows the story of tenants of 55 Dropsie Avenue in their vacations at a cookalein in the country. There is 15-year-old Willie. He and his mother are sent to that place by his father who wants to spend a time with his mistress. There are Benny (a clothing cutter) and Goldie (a secretary). They stay at a luxurious hotel near the cookalein with the hope to find, seduce, and take advantage of someone wealthy but instead they approach each other.

In simple yet powerful monochromatic illustrations, Will Eisner brilliantly delivered vibrant stories in A Contract with God and Other Tenement Stories.