Here you can read Joe Sacco’s Palestine summary and review online. You can also read the content pages of the graphic novel, which has become a classic journalism comic. 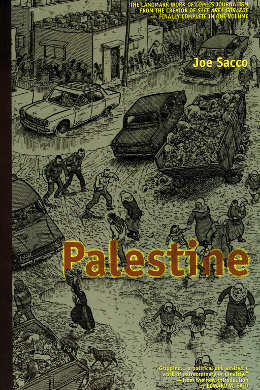 Considered a masterpiece, one of the best, among comic journalism, Joe Sacco’s Palestine graphic novel was originally published as a 9-issue comic between 1993 and 1996. It then was collected into 2 volumes before finally released as a single graphic novel in 2001. Palestine has gained a huge success and mostly positive critical reviews. It won the American Book Award by Before Columbus Foundation in 1996. It was placed at 27 by The Comic Journal in their Top 100 English-Language Comics of the Century list.


Read Joe Sacco - Palestine summary, from the whole 9 comic issues, which has been compiled into a single graphic novel.
The story in Joe Sacco’s Palestine is mainly set between the end of 1991 and the beginning 1992. However, it sometimes flashes back to earlier important events such as the Gulf War, the first wave of the Intifada, the eviction of the Arabs, and some other events.

The book illustrates Sacco’s stay in the occupied territories in Palestine. Sacco presents the point of view of the Palestinians based on his meetings and interviews with the people in the West Bank and Gaza Strip. His narration describes the details of Palestinians’ daily life in those conflicted territories. Through his artworks and writings, Sacco pictures the daily struggles, dishonor and aggravation of the Palestinians.

In Palestine graphic novel, Sacco consciously stands as a westerner who wants to the unfamiliar truths about Middle East. Originllay, Sacco’s main duty in his journey to Palestine is journalism, documenting events and interviews with Palestinians. However, as his quest continues, the reality of the occupied territories has great effect on him. It drives him to participate. Nearing the end of the story, readers will see how active he becomes: sharing accommodations with the subject of his interviews and even violating curfew with them while in the Gaza Strip.

Use the link below to start reading Joe Sacco’s Palestine online. This award-winning graphic novel is definitely worth to read.
Start Reading