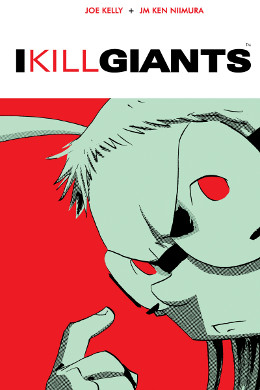 First released as 7-issues series, I Kill Giants is an incredible comic written by Joe Kelly (author) and illustrated by J. M. Ken Niimura (artist). It delivers a beautiful coming-of-age story of a geeky, outsider teenage girl named Barbara Thorson and how she struggles to deal with the monsters inside and outside of her. First released as a 7-issue series in mid 2008, the comics were finally published in a single collection graphic novel by Image Comics in late 2009.

The main character in the graphic novel is Barbara Thorson, a fifth-grader who is not having a great time in her life, at home and especially at school. Her witty, blunt, and careless reactions when dealing with people has led her to many troubles. And if that is not bad enough, she has to deal with all the troubles in being a giant slayer. Well, that’s what she tells everybody, that she hunts and kills giants. Is that just her way of dealing the monsters inside her? Just her fantasy? But, what if everything she says is true, that the giants are not just in her head but actually exist in reality?

The comic series has received great positive critical responses. In 2008, IGN chose I Kill Giants as the winner of Best Indy Book. In 2012, the series achieved Gold Award at the 5th International Manga Award. Other remarkable achievements made are getting into top 10 comics of 2009 in New York magazine, listed in Young Adult Library Services Association’s top 10 graphic novels for teens in 2010, and picked in the Gaiman Award as the 2nd best foreign comic book in Japan.

The success of I Kill Giants graphic novel/comic has raised an interest in making its film adaptation. Film studio Treehouse Pictures started the project in 2015. They signed author Joe Kelly as the scriptwriter and Andres Walter as the director. Casts for the main characters includes Zoe Saldana and Madison Wolfe. The film is scheduled for 2018, which will be released under the same title as the book.