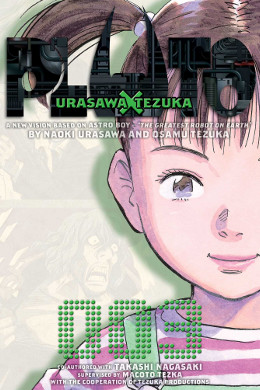 The 3rd volume of Pluto introduces some new interesting characters and another, darker, side of the world. Enters Uran, a cheerful little girl robot who can feel the emotion of any living things (including robots and animals) around her. She is Atom little sister and contrary to Atom, she is quite a stubborn kid. Her senses to feel sadness brings her to a mysterious stranded robot who lost his memory. Together with Uran, he tries to discover who and what he really is.

Adolph Haas is a devoted husband and father. To his family and most of the society, he is a good gentleman. However, he secretly keeps a dark side as a member of a robot-hater clan. He is now on a mission to avenge his brother and his target is agent Gesicht.

Professor Abra (originally Abullah) is an exceptional robot scientist from Persia. This mysterious figure has confused the detector in classifying him as human or robot. He says most of his body is mechanical because he lost most parts of his body during the war.

Below are the acts/chapters included in the 3rd volume of Pluto graphic novel manga available to read.
Start Reading