Read the fourth volume of Pluto manga graphic novel by Naoki Urasawa. It is a bestselling and award-winning science-fiction thriller series based on a classic series by Osamu Tezuka Atom (Astro Boy). 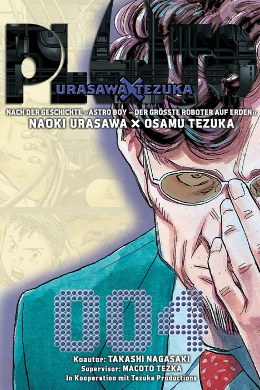 In Naoki Urasawa’s Pluto volume 4, the mysterious killer that hunts down the most powerful robots in the world brings his terror to Japan. Another powerful robot meets a tragic end, an event that engulfs Japan and the whole world in grief.

Meanwhile in Germany, there is an unexpected turn of event for Europol robot Gesicht and robot hater Adolph Haas. The robot-hater clan now has different plan for Gesicht that doesn’t go along with what Adolph wants. Now the clan is targeting Adolph instead and Gesicht is assigned to protect him, the man who holds a vengeance against him.

There is also more appearance of Epsilon, who with poton energy, is probably the strongest among the most powerful robots. After Epsilon saves Professor Hoffman (creator of Gesicht), there is a revelation about a meeting in the past of three brightest minds in robot technology: Prof. Tenma (creator of Atom), Prof. Newton-Howard (the late creator of Epsilon), and Prof. Hoffman. In that meeting, Prof. Tenma showed his ambition to build the strongest robot with the most perfect AI, and it might be related with the mysterious haunting robot killer now.

Below is the list of acts/chapters included in the fourth volume of Pluto graphic novel manga available to read.
Start Reading