You can read the fifth volume of Naoki Urasawa's Pluto graphic novel manga series. Based on Osamu Tezuka Atom (Astro Boy), a worldwide classic, the series has won several prestigious awards and become a bestselling. 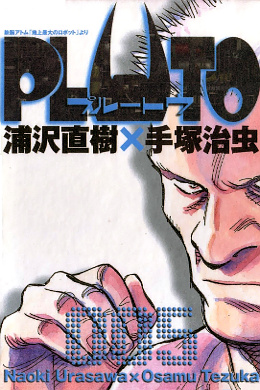 Pluto, the brilliant science-fiction graphic novel manga series by Naoki urasawa, is getting more and more thrilling in volume 5. The mysterious killer is still on the hunt and only three most powerful robots are left: Gesicht, Heracles, and Epsilon. Together they try to solve the mystery but one of them soon has to face the enemy, who could be the greatest robot on earth.

Gesicht is still carrying out his duty as a Europol agent to protect Adolf Haas, a man who previously try to kill him out of vengeance. This duty leads Gesicht in a journey to reveal his own past, a dark past that has been erased from his memory. At the meantime, his investigation on the killer of the powerful robots has led him to the imprisoned King Darius, former king of Persia whose kingdom got destroyed in the Central Asian War.

Professor Tenma suddenly appears in Japan. He is the creator of Atom and is considered the most brilliant man in robot science. He returns to bring Atom back to life by giving Atom the most sophisticated AI in the world. However, it is a very big and risky gamble because instead of bringing the courageous and kind-hearted Atom back, professor Tenma could also give birth to a monster.