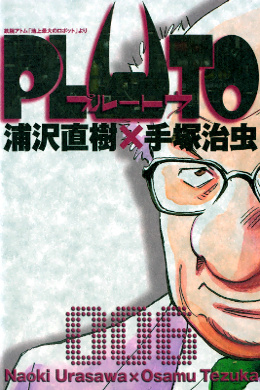 Pluto is a brilliant science-fiction thriller graphic novel manga by Naoki Urasawa, which is based on the classic series Astro Boy (Atom) by Osamu Tezuka. Volume 4 reveals more clues and bigger pictures regarding the suspenseful mystery that goes throughout the series.

The mysterious murderer has killed 5 of 7 most powerful robots in the world. The remaining two are the Europol robot Gesicht and a pacifist robot with powerful photon power Epsilon. Gesicht is investigating the murders and he finally finds out the identity of Pluto, the mighty robot who slaughtered the powerful robots.

Gesicht’s investigation reveals a bigger political crisis related to the murders. He meets Dr. Abra (originally Dr. Abdullah), the Science Minister of Persia, and believes that the man is hiding something. After getting some information about Sahad, Dr. Abra’s son, Gesicht manages to pinpoint the location of Pluto and he finally gets face to face with the mysterious robot killer.