Read the 7th Volume of Pluto, an Award-winning and Bestselling Graphic Novel Manga by Naoki Urasawa

At this blog you can read 7th volume of Naoki Urasawa's Pluto graphic novel manga series online. The brilliant series is based on Osamu Tezuka's classic series Atom (Astro Boy). Pluto has become an award-winning and bestselling series worldwide. 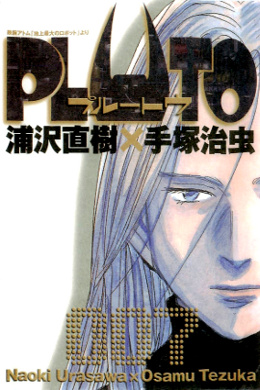 Entering the 7th volume, we see only one most powerful robot in the world left, Epsilon. The other six, including Atom and Europol robot agent Gesicht, have been killed by an extremely powerful robot. However, before his death, Gesicht managed to collect precious facts behind the murders and transfer the data to Epsilon. Now Epsilon knows who Pluto is and his relation to Dr. Abra (Dr. Abullah) and Bora. Now, being the last of the enemy’s target, the pacifist Epsilon has to make his stand to face the mighty Pluto.

In Japan Professor Tenma, creator of Atom, has received Gesicht last memory data from Gesicht’s wife. He is about to use the memory, that stores strong emotions of sorrow and anger, to revive Atom. However, even if Atom finally wakes up, Prof. Tenma couldn’t predict what kind of personality Atom will have.