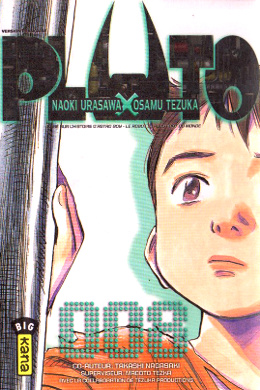 Here it is, the last volume of Pluto graphic novel manga. With this 8th volume, Naoki Urasawa brings a great finale to the epic science-fiction thriller that is based on Osamu Tezuka’s classic series Astro Boy (Atom). Despite being set in a robotic science-fiction theme, Pluto has delivered amazing emotional drama, deep philosophical questions, and a brilliantly gripping mystery, which finally is concluded here.

Using the last memory of Gesicht, which contains hatred and sorrow, Professor Tenma is finally able to bring back Atom to life. However, upon his awakening, Atom doesn’t seem like he used to be. Out of nowhere, he grabs a pen and finishes the mighty formula of anti-proton bomb, a bomb that has the capability to literally destroy the earth. Is it the effect of inserting Gesicht last memory of hatred to revive Atom?

Prof. Tenma finally reveals the true identity of Dr. Abra (Dr. Abullah), who and what he really is. The bigger geopolitical situation is finally shown, what has happened in the past Central Asian War, what happened in the Republic of Persia, and the mastermind behind the United States of Trachia. It is all connected to the birth of Pluto and the terror that has killed the most powerful robots in the world.

While the big political powers are playing their game, a big threat is hiding inside the earth. The mysterious Bora is ready to blow up the world to pieces.