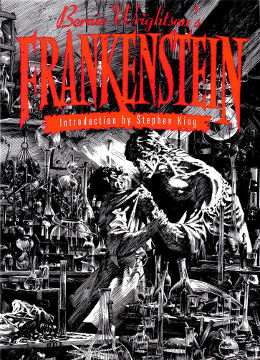 This is actually not a graphic novel. First published in 1983 by Marvel Comics (later republished by Dark Horse Comics), it is actually a reprint of the full novel of Mary Shelley’s Frankenstein, a classic, horror, science-fiction novel. Accompanying the original story are Bernie Wrightson’s graphic illustrations, and also an introduction by famous horror and mystery author Stephen King.

Frankenstein by Mary Shelley has been considered one of the most important classic works in literature, especially in horror and science fiction genres. The iconic character of Frankenstein has appeared in many popular works. The book itself has been adapted into various films, plays, and TV series. In 1983, Marvel Comics published a sequential art novel (graphic novel) edition of Mary Shelley’s masterpiece with Bernie Wrightson’s illustrations.

In 1983 Marvel Comics edition of Frankenstein, there are 46 pages of Wrightson’s awesomely haunting illustrations (some of them are 2-page spread). In simple balck-and-white, Wrightson’s graphic illustrations perfectly captured the darkness, coldness, and thrill of Shelley’s story. With “period style”, there is a classical touch in the illustrations as stated by Wrightson himself: “I wanted the book to look like an antique”. That characteristic suits the atmosphere of the story and the classic quality of Shelley’s work.

The simple, raw shading style of the graphic illustrations somehow enhances the thrill and provides more “grip”, as Stephen King stated in the introduction that the artworks “capture intent and mood” of the story. Wrightson himself said that his work for this Frankenstein edition “was a labor of love” and “it took about seven years” to complete all the whole illustration set.