A Graphic Novel on Everything about Comic by Scott McCloud: Understanding Comics

(You can read Understanding Comics online, one of the most important and influential works in the modern comic industry by Scott McCloud, at this site.) 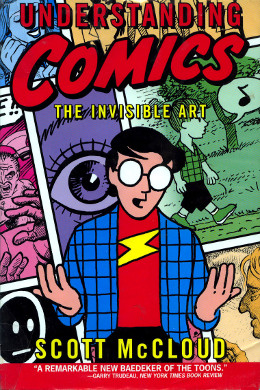 Understanding Comics: The Invisible Art is a comic (a graphic novel technically) on everything about comic. First published in 1993, it is one of the most famous works of Scott McCloud, American comic artist and author. In this book, McCloud digs deep into almost all comic aspects: the history, vocabulary, the underlying principles, the various elements and how they work. It presents detailed graphical explanation on comics as a form of art and communication medium.

Since its publication, Understanding Comics has gained huge success commercially and critically. Well-known comic and graphic novel authors and artists such as Neil Gaiman, Will Eisner, Alan Moore, Garry Trudeau, and Art Spiegelman expressed their praises for this seminal work of McCloud’s.

Providing abundant knowledge into the world of comic (and graphic novel), from the definitions, history, technicalities, theories, methods, concepts, styles, elements, and many others, Scott McCloud’s Understanding Comics: The Invisible Art has become one of the most important and influential works in the modern comic industry.

I love it comic I read