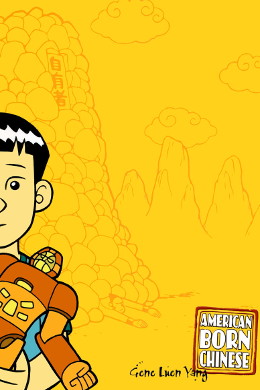 Asian-American comic author and artist Gene Luen Yang has put his name among the best graphic novel creators with his brilliant book American Born Chinese. Originally published in 2006 by First Second Books, the graphic novel delivers a parallel story of three main characters: Sun Wukong the Monkey King, an immigrant teen Jin Wang, and an American white boy Danny who has a Chinese cousin. Through these three characters, Yang portrays the issue of racial stereotypical views and the struggle of growing up, the transformation to one undertakes in search of his/her identity.

Sun Wukong the Monkey King is probably the most famous character in Chinese classic literature. Despite his existence as a monkey, Sun Wukong is a powerful deity who has been living for thousands of years. After he goes rampage and beats many gods in heaven, he is punished by Tze-Yo-Tzuh and buried under a mountain for five hundred years. He is then released Wong Lai-Tsao but must accompany the holy monk in the famous Journey to the West. In this book, he has yet another critical quest.

The next main character in the book is Jin Wang, son of an immigrant family in the United States. His family has moved from Chinatown, San Fransisco, to a suburb in which most of the population are white Americans. Finding one’s place in school can be quite a challenge for most adolescents. Added with cultural differences, it is a very difficult for Jin Wang. He also becomes the “bridge” between the stories of the other two main characters in American Born Chinese.

The third main character in this book is Danny. He is a white American boy, about Jin Wang’s age. As an adolescent, he is also struggling to fit in and to be accepted by his peers in school. This is especially true when his Chinese cousin, Chin-Kee stays with him. Chin-Kee’s accent, style, appearance, and habits represent the general racial stereotypes of Chinese. Undoubtedly, Chin-Kee’s presence puts Danny in a difficult spot.

To be honest.. I hated the book. It was boring and didnt make sense

I enjoyed the Graphic novel, its a problem we phase now being judged by looking different. This novel just shows it in differents way, Once with a monkey, One with the asian boy, and the hurtful stereotypes.